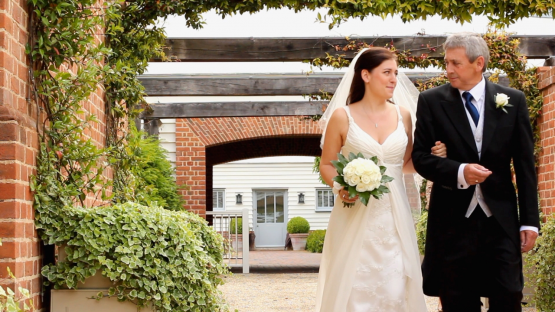 More and more wedding videographers are out there than ever before. With the relative affordability of DSLR cameras and the high quality video footage they produce alongside new and innovative film-making equipment those videographers that would have been priced out of the profession before can now create stunning shots for only a small outlay. With this increase, however, comes both benefits and pitfalls to couples looking to hire a wedding videographer.

I've seen a lot of beautifully shot showreels by videographers, packed full of stunning close-ups, moving shots of the bride putting on their wedding shoes and walking down the aisle, and beautifully lit slow motion images. I have to be honest, as a fan of composition and lighting and all the other elements that make film-making my passion, these shots make me go wow but they also make me wonder what was going through the couples mind on the day when these shots were being filmed?

If you've come this far on our website you've probably realised that our videography style is to be unobtrusive; to let the wedding day flow without interruptions from us. In our mind we are there to capture the moments as they happen from the best possible positions that do not interfere or distract the wedding couple. We don't want our couples to know we're there. We are video ninjas. And we believe that most couples prefer it that way.

So now I'll bring you back to why the current trend and increase in wedding videographers is both a good thing and a bad thing. Let's start by the good. Competition is always good. It increases quality, leads to more competitive prices and enhances creativity. The benefits are obvious. The pitfalls less so. Since we began Jumping Spider wedding videography a few years back we've heard numerous stories about other wedding videographers. I hate to say it, but they have rarely been good. The majority of stories come from photographers, whilst others come from couples. Here a just a couple of stories we've heard...

We've filmed a number of weddings with Robin at Bullit photography and he's always got a story to tell us about other videographers. One instance was about a wedding videography company; large, experienced and London based. He told us how 4 camera persons and a lady turned up to film the day. The lady acted as director to the camera persons, although in Robin's words she acted more like the mother of the bride. She took to directing the couple as well as her crew. The crew also carried a video light which they constantly shone on the couple and they filmed with a steadicam - a piece of equipment ideally best used when you are in close proximity to the couple. He said it was one of his most frustrating wedding experiences and when he provided the photos to the couple they complained that videographers were always in the background of the images. I'm sure the video was fantastic with some truly wonderful shots, but was it worth it to the couple? I'd love to know their thoughts.

Another story comes from one of our couples. The bride told me that they specifically booked us because of the problems her sister had with their wedding videographers on the day of their wedding. The bride went on to tell me how the wedding videographers had stopped the bride whilst she was getting dressed and asked her to put her shoes on various times so that they could capture some stunning slow motion shots. The bride ended up being very late for the ceremony. The videographers then went on to follow the couple and stick to them throughout the day; always being directly in front of the couple whilst they walked and asking the couple to act out various scenes over and over again. To me this story is saddening and gives videographers a horrific name. It's selfish, intrusive and potentially can ruin the day for the couple.

I've heard many stories like this about both smaller and larger well known wedding videographers, but, thankfully, it's not the case with all of us. There are others like us. I won't mention them because they're our competition after all,  but if you're looking for a wedding videography always, always look beyond the highlights reel. Ask how they film the day. Ask to see a full length film. Ask if they use lights, steadicams etc. Ask for references from couples. Ask, ask, ask. That's my best advice. Think about how you'd like your wedding film captured and be wary of those with stunning showreels and low prices.

Contact us for more info about our service or read our couples feedback to get an idea about how they view our work.