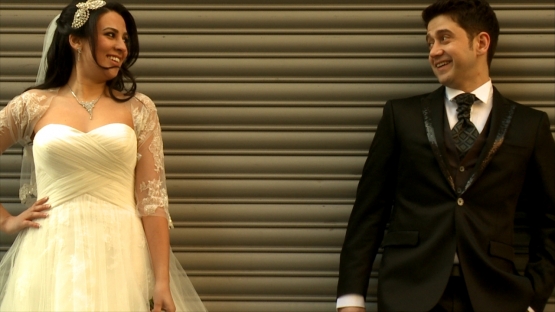 Even with a rudimentary knowledge of film-making, most individuals would be able to achieve a beautiful looking shot with a DSLR camera by following any of the numerous video guides available on You-Tube.

To a couple who want a modern looking wedding video the increase in such start-up film-makers can be a double edged sword. For every talented individual who can shoot, edit and most importantly tell a story of the day there will be those that can get some very pretty shots but have little idea of how to put them together.

There are some truly fantastic film-makers shooting on DSLR cameras, creating wonderful and beautiful short-form wedding films. They spend time using dolly tracks, steadicams, mini-jibs and  time-lapse photography to get truly stunning shots of the wedding day. They create gorgeous looking short wedding films and will sometimes even direct the couple to get the beautiful shot they need, as a photographer might. There are film-makers that do this well and there are film-makers that do it badly.

However wonderful the DSLR's footage is, there are limits to its capability. Alexis and I deliberate long and hard before every wedding, discussing in detail how we are going to film it; it sounds a cliché but every wedding really is unique. We shoot on both DSLR and the more traditional, adaptable High definition cameras. These traditional documentary cameras are far better than DSLR cameras at capturing actuality, and offer a flexibility that is lacking in DSLR film-making.

Generally if you are after a short wedding film between 15-20 minutes long, then it should be shot on DSLR cameras or a superior equivalent using all the specialist equipment available to the film-maker. As you are not asking them to capture all of your day in detail, they will have time to set up beautiful shots, but you have to be aware that there will be parts of your day missed. We have provided this service before and it is a really beautiful way of telling a story of the wedding day. You may not have all the speeches, all the ceremony or all your guests in the film but you will have a lovely memento of your day.

The majority of couples that come to us for their wedding video are those that are after a little bit of both. They want most of their day captured, they would like it captured discretely without being directed but they want it to look beautiful, entertaining, fun and watchable. Our wedding videos vary in length depending upon the couple and their requirements. Typically they are between 35-55 minutes long, shot on both DSLR and traditional HD cameras.  We use specialist equipment such as glidetrack and steadicam when appropriate and if we think it suitable for the couple, or if they have booked one of our larger packages where we have extra camera persons.

Trailing through websites watching wedding video shorts and showreels it is often hard to tell the difference between the good and the bad. The only way you can decide is by asking to view full-length films a company has made and avoid going just by the website highlights. Most importantly you have to decide what type of film you want and how you want your wedding videographer to behave on the day. To us at Jumping Spider it's all about understanding our couples' requirements and creating a wedding film that beautifully re-creates the romance and fun of their wedding day.

Since writing this blog and with the advancement of DSLR film-making technology we have now moved over fully to shooting all of our weddings on Canon Mark III DSLR cameras.