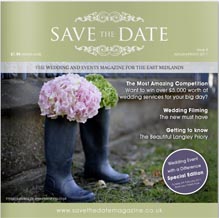 Save The Date Magazine – Wedding Films the new must have...

We watch television. We watch a lot of television. How much? Well a 2005 government report suggests we watch on average 157 minutes a day. Around about 18 hours a week. That’s 3744 hours a year, and of course this is in 2005, before the recession hit and we all stopped going out. Chances are it’s probably risen a bit since then. So what’s your point you may ask and what does this have to do with wedding videography...

I’ve worked and still occasionally work in television; I’ve worked on some great TV shows but I’ve also worked on shows that I would never watch and have had little or no creative input in. It’s been a job and one that I have enjoyed, but fulfillment; the feeling of making something truly unique, creative and genuinely something to be proud of, well apart from my own short films and the occasional television programme, I’ve only ever experienced those feelings when making a wedding video.

Now close your eyes for a few seconds and picture a wedding videographer in your mind. I’m 99% certain that you probably pictured a middle aged, slightly overweight man with a large VHS camcorder on his shoulder walking around and generally looking ugly and getting in the way. You probably not wrong in some cases, I have seen, through research, some absolutely appalling wedding filmmaking. I think there may be an ‘I can do that’ attitude – ‘All I need is a camera and a website and away we go!’. Well they’re right. Anyone can buy a very good camera for a reasonable price and point it at the bride and groom. So what’s the point in hiring a good videographer to do the same thing?

If we can all afford a good camera (You can buy High Definition Cameras for a few hundred pounds), why don’t we all make TV and films as well? Well I think we all now the answer to that one.

And now to the point.

We watch a lot of television programmes, and we watch a lot of movies. Good, bad, memorable, forgettable; they make us laugh, cry, shout and occasionally turn off. We watch actors, brilliant actors. We watch celebrities, funny, quirky, talented/talentless celebrities. We watch the public, the stupid, inept public. We watch everyone, but unless of course you are one of the above, we don’t watch ourselves. And most of us wouldn’t want to would we?

I have nothing, no moving image of myself up until the age of 23. I have no footage of my wedding day and I have nothing to show my children of my life before they existed. Sure I have pictures, but I have no voice, no laugh, no tears. Nothing. Zilch. There is even less footage of my own parents. Now I have a selection of cameras that are always near by, I capture everything these days; my parents on film behaving, well, behaving like parents and grandparents, myself and my wife behaving like the idiot parents we are and endless footage of my children growing up. But I have nothing of myself or my wife before the children existed. And what do you think they’ll really want to watch when they are older?

I’ve seen pictures of my mum and dad on there wedding day. All blue suit and flares. Great pictures bit brown through age but none the less still do the job. And that’s it, I’ve seen the pictures. The only other story I know of the day is that my dad had to take a lot of valium to cope with the nerves. How I’d love to see the big man a blubbering nervous drugged up wreck. How I’d love to watch a film of that day, see long deceased relatives bought back to life and see my mum as a young woman, not as a mum.

In case you haven’t got the point already I’m trying to sell you wedding videography. No really I am. But honestly I’m not only trying to sell for my business to be a success, I’m selling it because I believe in it. I believe it is a must have, I believe it should no longer be an optional extra that you can do without. I don’t want to take away the business of any other suppliers; they all make an incredible contribution to your day. The flowers, the photographer, the venue, the dress, and the wedding planner they are all as important as one another. I’m just trying to put GOOD wedding videography in that category.

Using multiple cameras, broadcast quality editing and sound recording equipment combined with experience and passion, a good, high quality videographer will make a remarkable memento of your day. They won’t be obtrusive, they’ll mingle well with your guests and they’ll capture the moments you missed. They’ll capture your friends and family, the tears and laughter, the nervous groom, the stunning bride, the proud parents and the best mans speech. They’ll then skillfully edit it, creating a story, set to beautiful, provoking music that evokes the atmosphere and emotion of the day (well we do anyway).

A good wedding video should not be underestimated. There are a sprinkling of quality wedding videographers out there, you can find them you just have to look and please avoid the bad ones, they give us all a bad name, after all anyone  can pick up a camera and point it at the bride and groom. But to give you an idea I recently received an email from a previous bride we filmed; she emailed me to tell me they had watched their wedding film seven times in two days. They both cried whilst watching it. We’ve made television watched by millions; I don’t think anyone would have cried. I know which I’d rather make.

Re-asses wedding videography, draw a new picture in your mind. Its come a long way, consider it for your wedding and if you do decide to have it filmed in 40 years time you’ll be so very glad you did. That’s if you find time to watch it in your busy TV watching schedule…